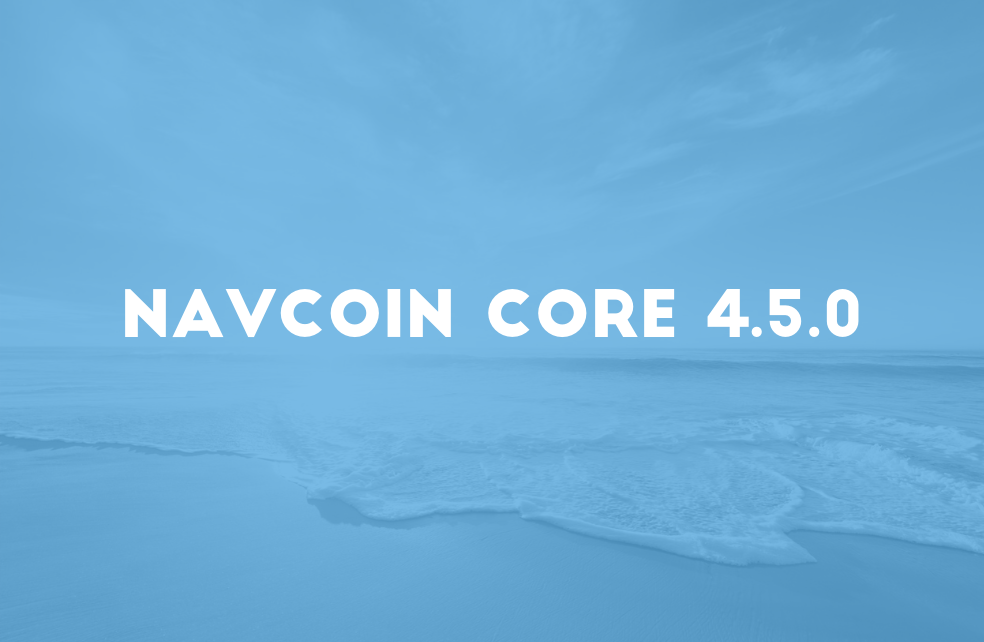 NavCoin Core 4.5.0 has been released today which marks the last significant update to NavCoin Core of 2018. This release includes two important consensus soft forks which will bring greater security to the network and to individuals funds; Cold Staking and Static Rewards.

Described in NPIP0002, Cold Staking will allow transactions to be associated with two private keys instead of one. One key is used for spending while the other can only be used for staking, therefore offering increased security of user funds by allowing them to keep the spending key offline and not in their hot staking wallet.

Described in NPIP0004, Static Rewards will change the block reward from being calculated as an annual percentage of the staking input, to always being 2 NAV per block. Total annual inflation will remain around 4% but individual rewards will increase to around 10% per annum depending on the total weight of the network. To claim the maximum staking rewards, wallets need to remain constantly online and securing the blockchain with their network weight.

Why and How to Vote

It is hoped that both of these soft forks attract new stakers to the NavCoin network, therefore increasing network security even further.

Both soft forks are signalling YES by default in version 4.5.0 so all you need to do is upgrade and you will be signalling for them automatically. If you wish to vote against them, it’s recommended that you still upgrade to 4.5.0 but then reject version bits 3 and/or 15 in your config file.

With the Community Fund in operation for about a month now, we’ve had some time to see what kind of participation levels in proposal voting the network will engage in. Most of the proposals have got significantly more than 75% yes votes, but the quorum is often just falling short of the 50% required threshold.

This soft fork is signalling NO by default in version 4.5.0, so if you want to vote for it you need to accept version bit 17 in your config file.

NavCoin Core now comes fully equipped with a graphical interface to view and vote on community fund proposals and payment requests. There is also a notification which will appear when a new proposal or payment request is found on the blockchain.

The wallet will now rate-limit the amount of block headers received from a single peer before banning them for misbehaving. This is an anti-spam measure to prevent malicious nodes from attempting to flood the network.

Beyond these keynote features, there has been some additional CFund RPC commands added and a stack of GitHub issues resolved. To see the entire list of changes, please visit the 4.5.0 release notes on GitHub.

You can download NavCoin Core 4.5.0 from the downloads section or directly from the Github release.

The Windows Installers are now available again for anyone who has been having issues with the zipped exe released as part of 4.4.0. Please note that the checksum for the windows installers is valid for the published files. However due to the cross platform build being non deterministic if you build the installer yourself from source, you will most likely end up with a different checksum.