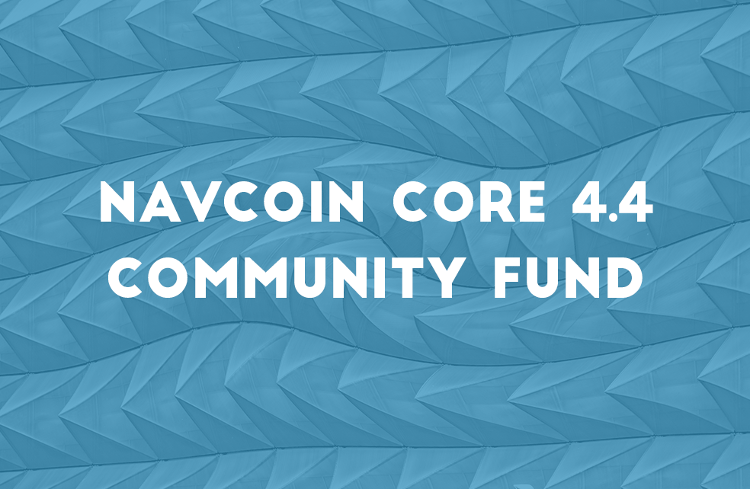 After almost a year and a half since the initial conversations began and the initial proposal was made, NavCoin Core v4.4.0 is now available for download. v4.4.0 introduces the final modifications required for the Community Fund to be fully functional.

It is important to start by thanking everyone for all the support and patience during the months that the testing phase lasted.

Technically this release can also be considered the most advanced and complex NavCoin has had to date. We have incorporated new testing routines into our usual development process, which will help make future releases more secure than ever. It has also allowed our development team to learn and understand the insides of NavCoin Core to an exponentially deeper degree in a short amount of time. We have built new connections and incorporated new faces to our list of contributors. Huge thanks to all of them too, this is just the beginning.

This launch is the result of a long process of consensus in the community. The first decisions were related to something as simple (but important) as if this development was going to be done or not, or decide what would be the amount contributed to the fund and where those coins would be taken from.

It will also be the consensus among the members of the network what will determine if the implementation ends up being a success or not. Now more than ever, NavCoin and its future are in the hands of its community.

Throughout the design process, we have been very careful to ensure that the system is protected against malicious actors who want to extract funds without completing tasks, and we have tried to adjust the voting requirements so that it’s not too easy or too hard to get a proposal accepted.

But it is important to point out that the ultimate responsibility rests with you. To make NavCoin stronger, it is imperative that your coins are in a node that you control and stake. Leaving them in third-party wallets (such as exchanges or staking pools) allows external actors to concentrate power and manipulate the result of the votes.

You are free to participate to the degree you want in this process, creating proposals, voting or simply expressing your opinion about them, but remember that the higher the percentage of participation, the higher the level of decentralization we will achieve. In the coming weeks, we will publish different tools to facilitate the process of creating proposals, as well as their voting, follow-up or discussion.

Your rights as a member of the network are now extended. Exercising them is important.

We can not wait to see the incredible proposals that the community will make, and the positive effects that this level of power redistribution will bring to NavCoin.

NavCoin v4.4.0 can be downloaded from Github by visiting the link below.

Learn more about the Community Fund

Some places you can discuss Community Fund proposals at are the new NavCoin Collab Site (Collab.NavCoin.org) and the NavCommunity.net forums.
You can use this simple tool to generate the console commands you need to interact the Comunity Fund when using the NavPi or your NavCoin Core Wallet.
The NEXT Wallet features a built in GUI for the Community Fund, a new version containing NavCoin v4.4.0 will be released soon.
A simple discussion platform for NavCoin stakers to discuss Community Fund Proposals is currently being created, the code for it can be found here.

The 4.4.0 release also introduces the concept of bit version rejection. It is designed to make it easier for the network to reject individual soft forks when they are bundled together in one release.

As soft forks come within the software signaling by default only the converse was needed for people to reject soft forks they did not agree with.

A new config concept has been added called rejectversionbit. Users can signal all the soft forks they reject by adding the following to the config.

All the changes in this release can be found in the release notes located here: https://github.com/NAVCoin/navcoin-core/blob/master/doc/release-notes/release-notes-4.4.0.md